Editing a print magazine is the ultimate collaborative enterprise. In support of the magazine’s mission, there are hundreds of decisions every issue, made by dozens of editorial and design professionals.

When I joined the ABA Journal as editor and publisher in the fall of 2006, our readers, ABA leaders and most the Journal’s staff thought the magazine had lost its way. It had become boring and predictable. Reading it was like a homework assignment.

Rather than trying to remake the magazine all at once, I set about reworking it bit by bit because that was the fastest way to effect change. Also, by working with my colleagues rather than imposing a vision, we were likely to surface the best ideas from the whole of the staff.

We had to find the right mix of stories and create designs that made our coverage pop. A selection of covers from 2006 illustrates our starting point:

Our major problems were:

Over the next three years, we rebuilt the magazine into one that connected with readers like never before. A remarkable 60 percent of readers reported that they read each of the last four issues, according to independent research.

A selection of covers from 2007-2011 illustrates how we made good in a host of ways on our new mission to “cover the trends, people and finances of the legal profession from Wall Street to Main Street to Pennsylvania Avenue.”

Franchise Issues: We created a series of annual projects that came to define the magazine, much as the list of the 500 biggest corporations defines Fortune. They included our Legal Rebels project profiling the nation’s most innovative lawyers, our list of the 100 best legal bloggers, and our annual look at law in pop culture, like the 25 greatest legal movies, TV shows and fictional lawyers.

Celebrities: We ran an excerpt from U.S. Supreme Court Justice Antonin Scalia’s book about how to be a better appellate advocate, along with an exclusive interview. Prior to the book’s publication, the justice spoke to only two news organizations: 60 Minutes and the ABA Journal. Our look at how U.S. Supreme Court Justice Ruth Bader Ginsburg balanced her professional and personal lives early in her career provided practical advice from a well-known judge. And we reached back into the distant past with our cover story about Abe, Esq., telling readers how they could practice law like Lincoln.

Ordinary Lawyers: We also put a spotlight on ordinary lawyers with extraordinary stories to tell, like a selection of solo practitioners who earn $1 million or more each year, a Cleveland solo who took an unlikely case to the Supreme Court and won, or the tale of Ken Feinberg, who remade the way America deals with mass tort suits like those stemming from 9/11 and the BP oil spill.

Practical Advice: We told our readers how to do more in less time, avoid ethical traps and save money on the goods and services needed to run a law practice, like legal research.

Investigating the News: When we covered the news, we gave our reporters the time and resources to go beyond the headlines. Our story about Iraqis left to fend for themselves after helping U.S. troops was named the best feature story of the year by the Chicago Headline Club. Our coverage of the legal fallout from the sinking of an Alaskan fishing boat earned the American Legion’s Fourth Estate Award – the first time a trade association magazine claimed the prize in its 30-year history. And our story about the slow pace of filling judicial vacancies was referenced during Congressional hearings on the subject.

Setting the Agenda: The deep expertise of the Journal’s reporters and editors enabled us to set the agenda for the profession in important ways. An essay about the evils of billing clients by the hour, written by novelist and practicing lawyer Scott Turow, anticipated the debate that would arise during the recession, as the economic power of clients increased. Our investigation into the suicide of a well-known Washington, D.C. partner who killed himself shortly after being fired made law firms think about handling layoffs in more sensitive ways. And our profile of the man behind the hugely influential U.S. News rankings of law schools presaged the profession’s increasing doubts about whether law schools really look out for the interests of their students or care more about how they rank. 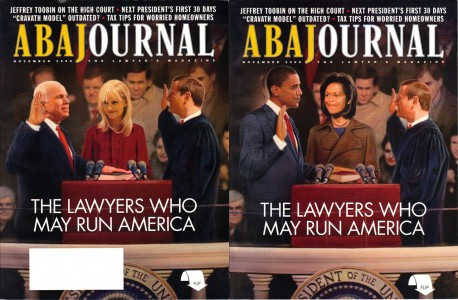 And we weren’t above an occasional stunt when it served the interests of the story. We wanted our November 2008 cover story to be about the new President, but needed to find a way to write it well before the outcome of the election would be known.

Our solution was to write two stories about the lawyers most likely to be appointed to senior positions in an Obama or McCain administration. We commissioned illustrations of both candidates taking the oath of office. One ran on the front of the magazine (McCain’s, decided by the flip of a coin). The other could be seen by flipping the magazine over to the “back” cover.

The stories received a great deal of attention, including from our colleagues in the media. The McCain cover was one of 92 covers used to illustrate a video about how magazines covered the 21st century’s first decade, produced by the Magazine Publishers of America. The only cover from a trade association publication, it appears at the 1-minute, 25-second mark: 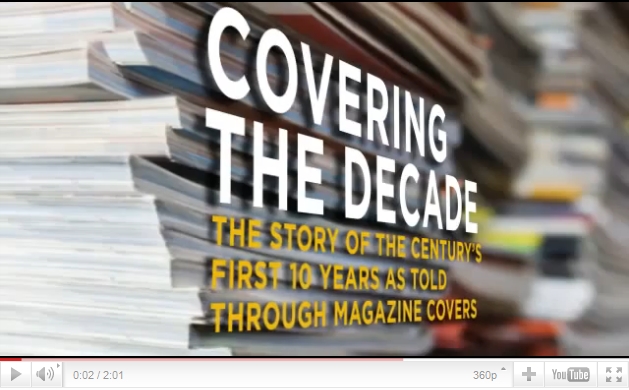 The Obama cover was featured in this Magazine Publishers of America’s video about Twenty Tweetable Truths About Magazines. It appears, sandwiched between covers from Esquire and the New Yorker, at the 56-second mark: 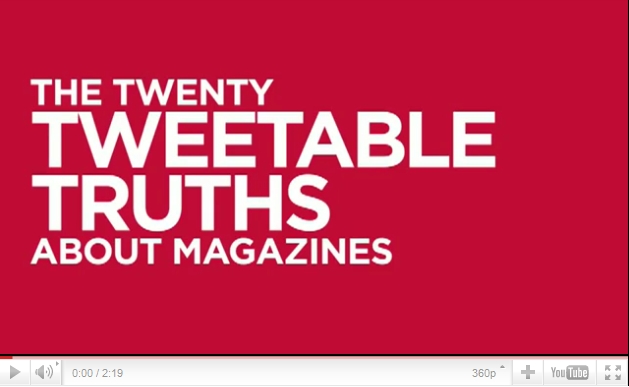 No matter what topic we covered, our goal was always to produce what my very first editor at the Cincinnati Enquirer called “Hey Martha” stories.

“Imagine a husband reading the newspaper over breakfast,” he told me. “He gets to a story he just has to share, and he says to his wife, ‘Hey, Martha, did you see this story in the paper . . .’  That’s a Hey Martha story.”