At the ABA Journal, as we started building our digital business in 2007, we wanted to be everywhere our readers consumed information. By delivering legal news through whatever means our audience used, we believed we could build a robust business from the web, email, mobile apps and social media.

The only certainty was that we would need to constantly innovate, creating new products as new digital platforms emerged. So my challenge was not just to create and monetize new products, but to build a staff culture that rewarded creativity and smart risk taking.

Our first task was to create ABAJournal.com. The magazine had a website in name only. Stories were posted and disappeared seemingly ad hoc, and the site’s design was years out of date. The site was, one of our readers wrote, “as painful as a nitrous-free molar extraction.”

Posting the full text of the magazine online, along with an archive stretching back years, was the obvious starting point. But the content of a monthly magazine wasn’t enough to attract a significant online audience.

Through a series of all-staff brainstorming sessions, we explored what websites we personally used and what drew us to them. To be successful, we realized that our site had to function at the speed of the web. And we needed to fill a niche in the market for online legal information that was untapped. Two decisions helped us achieve those twin goals.

First, we decided to update the site throughout every business day with summaries of and links to the best legal news coverage from around the web. Adopting the motto Law News Now, we created a continuous news desk, with a team of reporters working from 5 a.m. through 7 p.m. each weekday, posting 12-25 stories a day. Each of those stories was categorized into one or more of hundreds of topics, so busy lawyers could quickly drill down to the news affecting their practice area or interest.

Second, we made the growing community of legal bloggers a major part of the site. We built the most comprehensive online directory of legal bloggers, which as of June 2011 included 3,000 entries. We created a search engine covering all those blogs and an annual list of the 100 best legal blogs in the nation as selected by our editors. (You can learn more about how we leveraged the power of bloggers on the Fostering Community page.)

To add to our challenges, our new digital operations had to be funded out of existing revenues. So I reassigned five of our 28 magazine staffers to the online team. They built ABAJournal.com from the ground up, including a new content management system, design, and set of business rules about how the site would run. We also educated our ad sales force about what the site offered advertisers. We went from a standing start to launch in six months, at a cost of just $20,000.

When it launched in July 2007, the site was an immediate hit with readers, with traffic quadrupling in six months. “Overnight, the ABA Journal’s Web site went from Edsel to Ferrari,” said one critic. And the site was profitable from its first month of operation. By July 2011, the site was one of the nation’s largest legal news sites, recording 2.2 million pageviews and 500,000 unique visitors a month. Here’s how the top of the homepage looked as of that date: 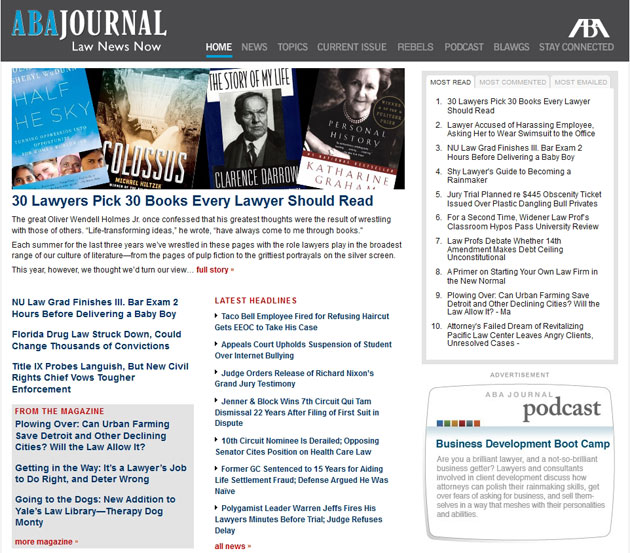 At the time of launch, we refashioned our weekly email newsletter. It had featured two to three originally-reported stories. Instead, it now featured our 10 most-read stories from the website, along with featured stories from the magazine and a blogger of the week. In short order, the newsletter’s circulation grew 60 percent, to 400,000.

With lawyers addicted to their Blackberries, we had a mobile website from the beginning. In 2009, as the iPhone began to made major inroads into law firms, we launched an app for the device featuring our daily and magazine stories. In 2010, a week after the iPad launched, we had an app for that device, taking advantage of its larger screen size. As of June 2011, our apps were on more than 65,000 Apple devices. In a year’s time, we saw traffic across all three mobile platforms increase 230 percent. And in just three days, I was able to sell out all mobile advertising space for an entire year.

We also experimented with other information distribution channels that would expand our brand but not necessarily earn a lot of revenue. We started monthly audio podcasts distributed on our site and via iTunes. We convinced Google to digitize more than 50 years of back issues as part of its Google Books project. We created widgets containing our headlines that any website could embed. And we added our headlines to a network of video monitors in more than 700 office buildings and hotels nationwide.

Along the way, we didn’t neglect social media. As Facebook and Twitter gained market share, we established accounts on both services. As of July 2011, the Journal had more than 16,000 followers on Twitter and more than 6,300 fans on Facebook – the most of any legal periodical.

By educating our advertisers about how our electronic products could help them reach new audiences in new ways, I and our ad sales team were able to build the Journal’s digital products into a $1 million business over the course of three years. Thanks to the growth of our digital revenue, we were able to not just survive the Great Recession, but thrive in its midst.