Every media product needs to be constantly reinvented – and none more so than those targeted at a young demographic.

Student Lawyer magazine is read by the almost 30,000 ABA members who attend law school. It is produced monthly during the academic year by the ABA’s Publishing Services Group for the ABA’s Law Student Division. By 2010, it had been many years since the publication had been thoroughly re-examined. A selection of covers shows just how dated the magazine appeared:

Working with a team of two designers and two editors, I oversaw a total rethink of the publication – starting with the question whether we really needed a magazine at all. The results of our reader survey surprised us: 75 percent of readers said they preferred print over digital for the kind of career information the magazine provides. Half of our readers said they had read each of the last four issues and 55 percent saved all or part of each issue for future reference. Despite the stereotype of younger readers loving all things digital, this audience wanted to continue to get a magazine.

Through a series of brainstorming sessions, the redesign team and I identified what needed changing:

We redesigned the magazine from the ground up, changing everything from the nameplate on the cover to the body font of the stories. Our new covers, with more powerful graphics and bolder headlines, looked like this:

Inside the magazine, we aired out our layouts, often running sidebars with our feature stories to break up walls of text and provide readers with multiple points of entry into a story. Our art budget for each issue was so small we couldn’t afford to photograph our subjects, so we incorporated reader-submitted photos and employed more low-cost wire service shots.

To incorporate shorter articles we created a new section at the front of the magazine called In Session. Each month, it started with a one-page article called Head of the Class about a law student in the news. That was followed by a two-page spread showing a map of the United States that featured one-paragraph news items from law schools across the country.

The redesign was a big hit, both with the leadership of our internal client – the ABA’s Law Student Division – and with readers. At last, we had a magazine every bit as leading-edge as the profession’s next generation.

Click on the image below to view the In Session section and feature articles from the January 2011 issue, which debuted the new design: 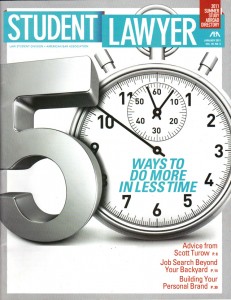