Redesigning the ABA’s website was among the most politically and logistically challenging assignments I’ve ever undertaken. It is a case study in how to manage change in a large, matrixed organization.

The ABA’s staff and members had long complained about the site’s design, architecture and functionality. Almost everything about the site was a decade out of date. Here’s how the top of the homepage looked in 2010, as we began the redesign process: 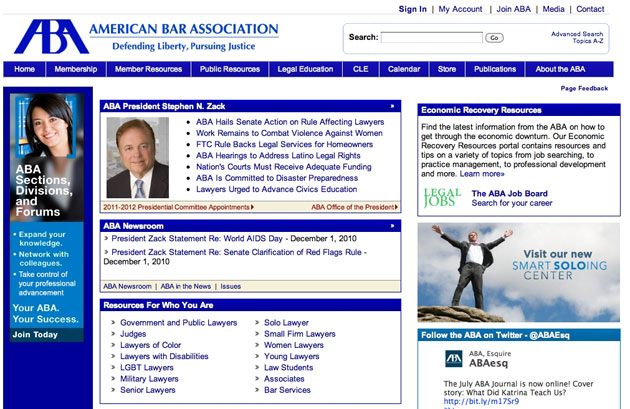 At the core of the site’s problems was that there was almost no centralized oversight. A four-person department was responsible for a site that had more than 100,000 web pages and more than 200,000 digital assets – PDFs, Word documents, PowerPoint presentations and the like. Out of an ABA staff of 900, almost 400 people had rights to update the site, including its core templates.

That led to the site becoming – much like the ABA itself – a collection of silos. Design and the quality of content varied tremendously from one section of the site to another. It made it difficult for users to find information quickly. Everyone agreed the site needed to be managed as a single product, but even so, no one wanted to surrender the freedom to do as they pleased on their section of the site.

Based on my success creating and growing ABAJournal.com, I was asked to co-lead the redesign process with the ABA’s webmaster. In February 2010, the ABA hired Ogilvy & Mather to work with us on what became an eight-month redesign process. The process was broken into 13 stages, starting with the general (such as business objectives and website strategy) and moving to the specific (such as the HTML code for our new templates).

Knowing our solutions would require enormous amounts of compromise and change, we had to design a process that would maximize buy-in from a reluctant staff. We created a process that was the most collaborative in the ABA’s long history.

At the beginning of each of the 13 stages, Ogilvy presented their recommendations. Those were distributed to more than 250 ABA members and staff representing the organization’s many constituencies. They were given a week to review the materials and provide written comments. Near the end of that week, Ogilvy staff members presented their ideas in workshops at the ABA’s Chicago headquarters at which more feedback was collected; those sessions were also streamed as webinars, so members across the country could participate.

At the end of that week, the ABA’s webmaster, a team of five ABA members  and I would assess the feedback, make changes large and small to Ogilvy’s recommendations, and finalize our decisions for that stage. For particularly complicated stages of the process, such as wireframes and templates, we would go through a second or third round of reviews.

Ogilvy told us this was the most complicated redesign process they had ever been involved in. And there were certainly faster ways to reach the decisions we made. But by taking the time to involve the whole organization at every stage, the final product was something everyone had participated in creating. And we could point to that consensus-driven approach when individuals raised objections to decisions that had been made months before.

The redesigned site has a clean, modern layout. We transitioned from a design that was little more than a list of links to one that relied more heavily on images. That was most apparent on our new homepage, where a large carousel that automatically cycles through four images dominates the top of the page: 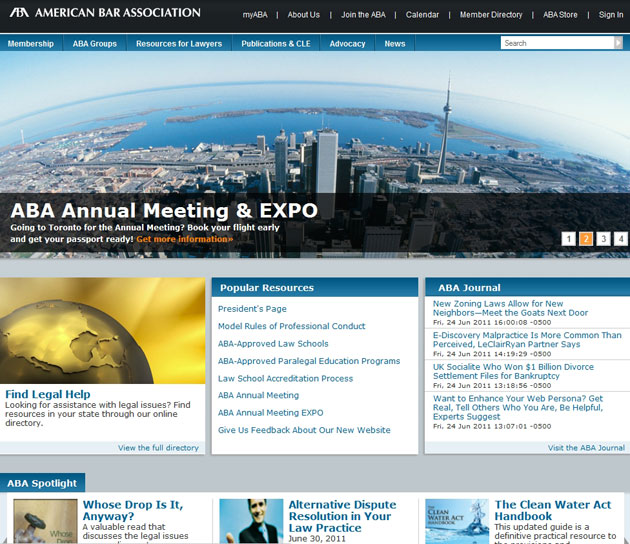 What we did behind the scenes fixed the site’s other problems:

A year after the process had begun, the redesigned site debuted in February 2011 to almost universal praise among ABA members and staff. That was due as much to the collaborative process of redesign as to the product we produced.

And by instituting a new set of rules governing how the site would be maintained, rather than creating a centralized bureaucracy to control the site, we solved the site’s long-standing problems while working with – rather than against – the ABA’s decentralized power structure.