How do you cover innovation in an innovative way?

That was the challenge the ABA Journal faced in early 2009, in the depths of the recession. Law firms nationwide were laying off droves of attorneys every day. The news got so depressing that several readers asked us to just stop reporting it.

While that wasn’t a viable option, it got me to thinking about how we could instill some hope in our audience that things wouldn’t always be this bleak. Could we be upbeat without becoming Pollyannas?

The answer lay in the increasing number of attorneys trying to bring innovation to the practice of law, remaking their corners of the profession. Like the Santa Monica, CA solo practitioner who opened a coffee shop where you could get legal advice along with your mocha cappuccino. Or the Fortune 500 general counsel who forced the law firms he hired to staff his projects with minority attorneys. Or the law school dean in Chicago who thought students should learn as much about the business needs of clients as the substance of the law.

In a profession that cherishes precedent and tradition above all else, this trend was remarkable. Identifying it, describing it and celebrating it so that our readers could learn from their examples was what journalists do best

We called these innovators Legal Rebels, and adopted as the project’s mascot Lady Justice with a pirate’s patch over one eye. We set about profiling 50 Rebels over the course of four months. While some of those profiles would run in the magazine, all of them would appear online. And each would have a video interview, audio podcast, photo slideshow or some other form of multimedia component. That was something the ABA Journal had never done before, so I and my staff would learn by doing.

As we were assembling the list of Rebels, we asked our readers to submit nominations. We thought we might get a few dozen. More than 250 poured in. We knew then that we were onto a good story, as well as a kind of storytelling that was new to us – one in which our readers were as much participants in the journalism as consumers of it.

With those profiles as the core of the project, we began to add interactive elements.

The Rebels project was more than just a package of stories – it was describing a movement. And every movement worth its salt has a manifesto. So we posted a draft manifesto on our site as a wiki, and invited our readers to edit it. Once a consensus emerged around the wording, we posted the final version and asked readers to sign it, committing themselves to innovation in their corner of the legal profession.

The Rebels project was also about a journey, as the profession traveled from the status quo toward some undefined future. What better way to cover a journey than to actually take one? 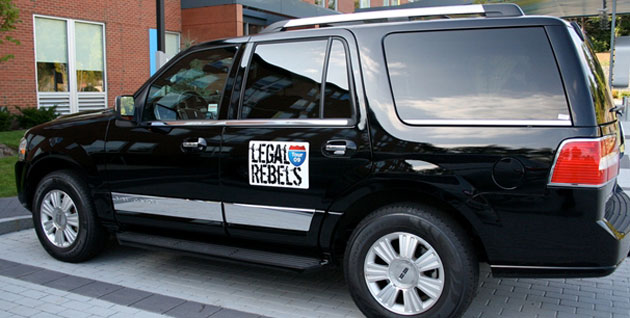 For two weeks in September 2009, three colleagues and I took a road trip from Boston to Washington, D.C. Rumbling down I-95 in a black Lincoln Navigator SUV, complete with Legal Rebels signage on the doors, we stopped each day to visit with a new Rebel and post his or her profile online, along with a video interview. 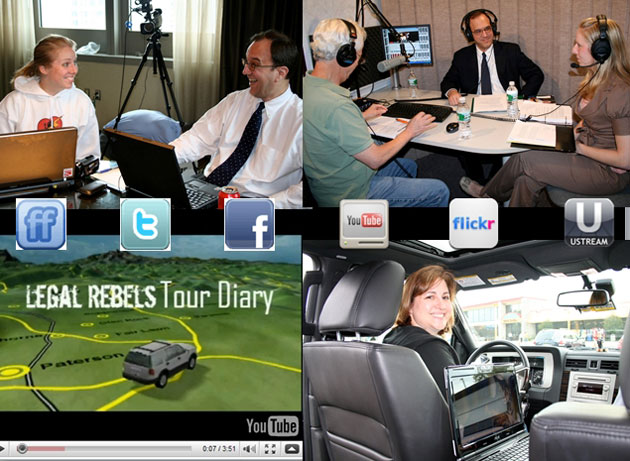 But we also wanted our readers to ride shotgun. So we mounted a webcam on the dashboard that broadcast live whenever our vehicle was in motion, so our audience could listen in as we talked about our latest visit and prepared for our next. We embedded a Google Latitude map on our site that tracked my cell phone, so readers could see where we were every minute, down to the block.

And we filed a steady stream of updates to Twitter, Facebook and other social media sites. We heard back from thousands of readers hungry to interact; they sent us everything from questions to ask in our next interview to suggestions where to eat. (If you visit New Haven’s Pepe Pizza, I recommend the clam pie.) We ended every day filing a video tour diary, in which we discussed who we’d seen and where we’d been, and thanked our readers for their contributions.

And we weren’t above some pure silliness. When we met with our readers along the way, like at a Manhattan tweet-up, we gave them Rebels temporary tattoos. And readers could buy Rebels swag – t-shirts, caps, even a skateboard – from our online store.

Advertisers clamored to align their brands with the legal profession’s top innovators, earning us six figures of fresh revenue during one of the most difficult years for selling ads since the Great Depression. And our tour hotel rooms, vehicle and communications gear were all provided by sponsors (learn more about those sponsorships on the Negotiating Partnerships page).

The project was so well received that it’s become an annual event. In 2010, we focused on Rebels who are solo practitioners and doubled our revenue. In the fall of 2011, the project will focus on the other end of the market – innovators at the nation’s largest law firms.

One of the most long-lasting effects of the project has been how it’s changed perceptions of the ABA Journal and the ABA itself. As one reader tweeted: “I’m having trouble putting the words ‘ABA’ and ‘rebels’ in the same sentence, but I’m getting used to it.”